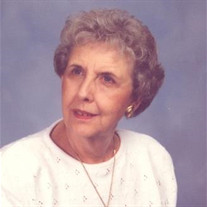 Billie Elizabeth Holcomb Hooper passed away on February 25, 2019. Private graveside services will be held at Resthaven Cemetery Thursday the 28th of February in Jacksonville, Texas under the direction of Crawford-A. Crim Funeral Home. Billie was born in Jacksonville on October 6, 1923 to Wiley and Jewel Holcomb. She graduated from Jacksonville High School and attended Lon Morris College. Billie received her bachelor's degree from Texas Woman's University and her masters from Stephen F. Austin State University. Billie was married to Gene M. Hooper and they had four children. Gene preceded her in death in 1958. Billie began her teaching career in Lufkin at the age of 20. In later years Billie taught in Henderson I.S.D. in the speech and English departments. She directed many senior plays, U.I.L. speech and one act play competitions, and taught English classes. She became the senior English teacher at Henderson High School and head of that department, retiring in 1989. She was a member of First United Methodist Church of Henderson where she was very active in the PALS Sunday School class until her health began to decline. In addition to her parents and her husband, she was preceded in death by her brother Ed Holcomb and his wife Ruth, and brothers-in-law Raleigh Hooper and Jack Hooper. She is survived by her children; Paula Denmon of San Juan del Sur, Nicaragua, Beth Irwin and her husband Ronnie of Dallas, Chrisan Smith and her husband Jim of Albuquerque, New Mexico, Mart Hooper and his wife Cathy of Henderson: grandchildren; John and Lisa Perkins, Meredith and Kyle Liner, Jeffrey and Natalie Irwin, Martin and Sophie Hooper, Lily and Weldon Davis, Steven Smith, Shawn and Erin Smith, Jennifer and Kyle Christy and great-grandchildren, Mallory Perkins, John Perkins, Caden Liner and Reese Liner, and sisters-in-law Rubynell Hooper and Helen Hooper and numerous nieces and nephews. The family thanks the Staff of Azalea Place and her caring sitters for taking such good care of her during her last days. The family would like to invite friends to come and share memories on Thursday, February 28, 2019, from 4-6 p.m. in the parlor of the First United Methodist Church. Honorary pallbearers will be John M. Perkins III, Jeffrey Irwin, Martin Hooper, Kyle Liner, and Weldon Davis. In lieu of flowers, memorials may be made to First United Methodist Church Preschool scholarship fund at 204 N. Marshall, Henderson, TX 75652, Hospice of East Texas at 4111 University Blvd, Tyler, TX 75701, HISD Education Foundation at P.O. Box 728, Henderson, TX 75653, or the charity of your choice. Words of comfort may be shared with the family at www.crawfordacrim.com.

The family of Mrs. Billie Elizabeth Hooper created this Life Tributes page to make it easy to share your memories.