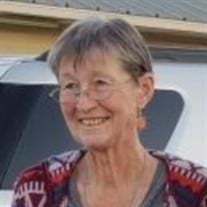 Funeral services for Mrs. Betty McCormack, 73, of Brachfield, will be held at 10:00 a.m. on Monday, December 28, 2020, in the chapel at Crawford-A. Crim Funeral Home with Bro. Marshall Moorhead and Steve Sanders officiating. Interment will follow at Shiloh Cemetery under the direction of Crawford-A. Crim Funeral Home. The family will receive friends from 5-7 p.m. on Sunday, December 27, at the funeral home. Mrs. McCormack passed from this life on December 23, 2020, at Henderson Health and Rehab. She was born September 26, 1947, in Henderson to the late James Boyd and Connie Belle Patrick and lived all of her life in Rusk County. Betty graduated from Henderson High School in 1967 and went on to attend Panola College. She loved history and southern belle culture. Mrs. McCormack worked as a seamstress for Sue Ann's and Dickies, among other businesses, and also worked for the Fairplay General Store and 4 Corners Store. Her family would attest to the fact that Betty was not a fan of snakes and enjoyed hunting right up until she got locked in her deer stand. She was also very proud of the commemorative plates that she had displayed on her kitchen wall. Betty loved and adored her children, grandchildren, and great-grandchildren as well as their friends and claimed them as her own. Mrs. McCormack was a member of Sulphur Springs Missionary Baptist Church. In addition to her parents, she was preceded in death by her daughter, Virginia Beth Lane. Survivors include her husband of nearly 50 years, David McCormack of Brachfield; daughter, Connie Flanagan and husband Danny of Brachfield; grandchildren, Kelly Weatherly and husband Hunter, and Todd Flanagan; great-grandchild, Kansas Weatherly; and a host of cousins, other family, and many friends. Pallbearers will be Tim Wheat, Todd Flanagan, Hunter Weatherly, Carl Orr, and R.D. Wittner. Honorary pallbearer will be Danny Flanagan. Words of comfort may be shared with the family at www.crawfordacrim.com.

Funeral services for Mrs. Betty McCormack, 73, of Brachfield, will be held at 10:00 a.m. on Monday, December 28, 2020, in the chapel at Crawford-A. Crim Funeral Home with Bro. Marshall Moorhead and Steve Sanders officiating. Interment will... View Obituary & Service Information

The family of Mrs. Betty McCormack created this Life Tributes page to make it easy to share your memories.