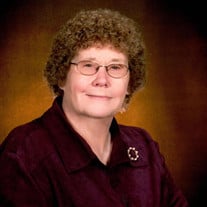 Funeral services for Mrs. Betty Gayvoughn Nessmith, 82, of Henderson, will be held at 2:00 p.m. on Saturday, May 23, 2020, in the chapel at Crawford-A. Crim Funeral Home with Rev. Mike Gribble officiating. Interment will follow at Lakewood Memorial Park under the direction of Crawford-A. Crim Funeral Home. The family will receive friends from 1 p.m. until service time on Saturday at the funeral home. Mrs. Nessmith passed from this life on May 21, 2020, at Christus Trinity Mother Frances Hospital in Tyler. She was born March 19, 1938, in Throckmorton to the late E.W. and Bonnie (Anderson) Ledbetter. Mrs. Nessmith was previously a resident of San Antonio, and a big Spurs fan, before moving back to Henderson in 2005. She worked for the Texas Health Department as a medical records coder and was formerly a member of the Order of the Eastern Star. Mrs. Nessmith was also a member of Victory Road Baptist Church in Kilgore. In addition to her parents, she was preceded in death by her husband, Joe Albert Nessmith; son, Bill Nessmith; granddaughter, Amber Nessmith; and sister, Venita Choate and her husband Bobby. Survivors include her daughter, Bettye Denison and husband Jeff of Henderson; grandchildren, Travis McLaren, Nicole Denison, Daniel Denison, and Savannah Denison; nieces and nephews, Lana and David Pierce, Rick and Joy Choate, Judy and Jim McNeill, and Wesley and Lea Nessmith; as well as other cousins, family and friends. Pallbearers are Daniel Denison, Rick Choate, Matthew Cole, David Pierce, Bryan Clark, and David Willis. Words of comfort may be shared with the family at www.crawfordacrim.com.

Funeral services for Mrs. Betty Gayvoughn Nessmith, 82, of Henderson, will be held at 2:00 p.m. on Saturday, May 23, 2020, in the chapel at Crawford-A. Crim Funeral Home with Rev. Mike Gribble officiating. Interment will follow at Lakewood... View Obituary & Service Information

The family of Mrs. Betty Gayvoughn Nessmith created this Life Tributes page to make it easy to share your memories.