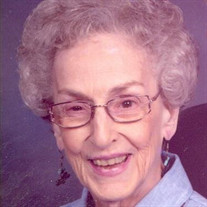 Bennie "Dutch" Mays Monzingo, 93, of Henderson, passed away Monday, July 1, 2019, at Brookdale Henderson Senior Living Center. Her long and beautiful life centered around and infinitely enriched family, friends, church, and community. Dutch was born the middle of five children to Vernon and Ethel Mays at New Salem on December 23, 1925. She and her siblings, who with their families always remained close, attended the New Salem school and Henderson High School. Following high school graduation in 1942, Dutch lived in Henderson with her Uncle Will and Aunt Hattie Mays and worked downtown at the Citizens National Bank. In November, 1946, Dutch met Arthur Jackson "Jack" Monzingo, a soon-to-be petroleum engineer with Magnolia Oil Company (later, Mobil Oil). They married one year later and began a life of following the Oil Patch with Mobil, adding three children along the way: Arthur Foster, born in Midland, Texas, in 1952; Cheryl Lynn, born in Salem, Illinois, in 1955; and Vernon Jackson, born in Wichita Falls, Texas, in 1964. Dutch and Jack settled and lived in Midland from 1970 until Jack's death in November, 2013. A year later, Dutch moved to Henderson to re-connect with family and long-time friends. Always resilient, personable, and with a fine sense of humor, Dutch made friends wherever she went. She loved the beauty that abounds in life. She had a gift for making people feel appreciated and loved. She repeatedly rose to the challenge of moving to new places, establishing a home, involving her children in school and enrichment activities, and serving the church. She was the kind of mother who made sure each of her children learned a musical instrument, participated in sports, became involved with the life of the Methodist Church, and fulfilled their academic responsibilities. Having learned well, her children did the same with their children, creating a cycle of accomplishment and personal fulfillment that is her legacy. Dutch was involved with church life wherever she lived. She served as President of the United Methodist Women at St. Luke's United Methodist Church in Midland. She chaperoned many youth trips throughout the years, demonstrating to her children the importance of community and spiritual life. Dutch and Jack moved to an assisted living facility in Midland in 2008, where Dutch became a Wii Bowling star and regularly worked out to maintain physical strength. She had many health setbacks but her faith, devotion to family, will to live, and commitment to physical therapy served her well. She lived to see her children graduate from college, marry, work, and have children and her grandchildren to graduate and embark upon their futures. Dutch was preceded in death by husband of 66 years, Arthur Jackson Monzingo, brother James William Mays, and sister Rebecca Risinger. She is survived by son Arthur Foster Monzingo and wife Christine of Austin; daughter Cheryl Lynn Adams and husband John Thomas Adams of Henderson; son Vernon Jackson Monzingo of Dallas; sister Mary Justice of Henderson; sister Ann Hollingsworth of Pine Bluff, Arkansas; and six grandchildren: Jeffrey Monzingo; Douglas Duncan; Gregory Duncan; Andra Adams and husband Christian Johnson; Madison Monzingo; and William Jackson Monzingo. Visitation will be from 3:00 to 5:00 p.m. on Sunday, July 7, 2019, at Crawford-A. Crim Funeral Home, 1414 S. Main St., Henderson. Funeral services will be at 10:00 a.m. on Monday, July 8, 2019 at the Funeral Home chapel with the Rev. Debbie Tipps officiating. Interment will follow at Lakewood Memorial Park under the direction of Crawford-A. Crim Funeral Home, Henderson. The family is deeply grateful to the caregivers and staff of Brookdale Senior Living Center for the outstanding care they gave Dutch. In lieu of flowers, donations may be made in memory of Dutch to either First United Methodist Church, 204 N. Marshall, Henderson, TX 75652; St Luke's United Methodist Church, 3011 W. Kansas Ave., Midland, TX 79701; or a charity of your choice. Condolences may be made at www.crawfordacrim.com.

The family of Mrs. Bennie "Dutch" Mays Monzingo created this Life Tributes page to make it easy to share your memories.