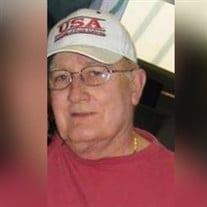 Graveside services for Mr. Ben Weatherby, 82, of Fort Worth, formerly of Henderson, will be held at 10:00 a.m. Saturday, August 8, 2020 at Strong Cemetery with Rev. Mike Mayhugh officiating under the direction of Crawford-A. Crim Funeral Home in Henderson. Mr. Weatherby passed away July 7, 2020 in North Richland Hills after an extended illness. He was born November 4, 1937 in Henderson to the late Edward Seaborn and Jewel Strong Weatherby. He attended Kilgore Junior College (where he also drove the bus for the Kilgore Rangerettes), University of Texas, and TCU. Mr. Weatherby proudly served his country in the US Army for two years, where he attained the rank of Second Lieutenant. He then served six years in the National Guard. He worked for 10 years at General Dynamics in Fort Worth, and for 22 years in the Medical supply field with 14 years spent with General Medical; 8, with Texas Hospital Corp. He retired in 1995, only to return to work in a year out of "sheer boredom". He went on to deliver the Fort Worth Star Telegram for many years and drive a school bus for the Hurst-Euless-Bedford School District. He was of the Methodist faith. "Ben Ed", as he was known by those closest to him, loved music of all kinds but especially Blues artists like Stevie Ray Vaughan, Buddy Guy, BB King, and Magic Slim. He enjoyed watching the Texas Rangers and the Dallas Cowboys play ball, as well as watching Westerns (John Wayne) and reading them, especially writer Larry McMurtry. He was an avid reader. Most of all, he loved his family and friends- his best friend, Buck McElroy, and good friend since childhood, Ann Howard Lemon - and his beloved boxer, Charlie. He was preceded in death by his parents, Edward and Jewel Weatherby; brother, David Weatherby; and grandson, Brett Newman. Survivors include his daughters, Camille Weatherby of Daphne, Alabama, Jennifer Newman of Euless, Texas; sister, Phyllis Phelan and husband Tom of Enfield, Connecticut; grandchildren, Megan Gaydos and husband Nick, Joshua Petty, Shaylie Newman, Kira Dixon, Chase Dixon, Micayla Moore, Mia Newman-Londin; great-grandchildren, Caroline Gaydos and Corben McMillian; nieces and nephews, Dr. Amanda Weatherby Stimmel; Patrick Phelan, Grace Phelan, and other family and friends. In lieu of flowers, the family requests that donations be made to Strong Cemetery, 221 CR 342 S Henderson, TX 75654. Words of comfort may be shared with the family at www.crawfordacrim.com.

Graveside services for Mr. Ben Weatherby, 82, of Fort Worth, formerly of Henderson, will be held at 10:00 a.m. Saturday, August 8, 2020 at Strong Cemetery with Rev. Mike Mayhugh officiating under the direction of Crawford-A. Crim Funeral Home... View Obituary & Service Information

The family of Mr. Ben Weatherby created this Life Tributes page to make it easy to share your memories.

Graveside services for Mr. Ben Weatherby, 82, of Fort Worth,...