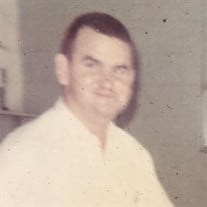 Funeral services for Mr. Arthur "Buster" Martin, 78, of Mt. Enterprise, will be held at 10:30 a.m. on Thursday, October 3, 2019, in the chapel at Crawford-A. Crim Funeral Home with Bro. Marshall Moorhead officiating. Interment will follow at Shiloh Cemetery under the direction of Crawford-A. Crim Funeral Home. The family will receive friends from 5-7 p.m. on Wednesday, October 2, at the funeral home. Mr. Martin passed away at UT Health Henderson on Monday, September 30, 2019. He was born April 9, 1941, in Mt. Enterprise to the late Lloyd and Rosie Bell Martin. At the age of one he contracted polio and wasn't expected to live, however, he beat those odds and lived a long, full life. He graduated from Mt. Enterprise High School on May 27, 1960. He went on to work at the Henderson Bowling Alley and the Jacksonville Army Tent Factory where he met the love of his life, Reta, and they were soon married. He then worked at Craig's Mobile Station and Hunts South Main Texaco until his early retirement. Buster was a life long member of the Church of Christ in Mt. Enterprise. Survivors include his wife of 52 years, Reta Frances Martin; son, David Lloyd Martin and wife Jennifer; grandson, Steven Martin and granddaughter, Julia Martin, all of Mt. Enterprise; and sister, Geneva Joyce "Pilly" Lockridge of Good Springs. In addition to his parents, he was preceded in death by his son, Cheyenne Joe Martin; and sisters, Diane Wolters and Christine Kolb. Pallbearers will be Samuel Elliott, Steven Martin, Dustin Thacker, Murdock Howell, Mike Gray, and Ronald Flanagan. Honorary pallbearers will be Thomas H. Flanagan, Leon Flanagan, Roger Flanagan, Ricky Flanagan, David Flanagan, and Ray Hutto. Words of comfort may be shared with the family at www.crawfordacrim.com.

Funeral services for Mr. Arthur "Buster" Martin, 78, of Mt. Enterprise, will be held at 10:30 a.m. on Thursday, October 3, 2019, in the chapel at Crawford-A. Crim Funeral Home with Bro. Marshall Moorhead officiating. Interment will follow at... View Obituary & Service Information

The family of Mr. Arthur "Buster" Martin created this Life Tributes page to make it easy to share your memories.