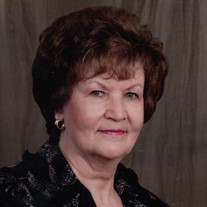 A celebration of the life of Mrs. Anna Ruth "Ann" Wallace, 83, of Henderson, will be held at 2:00 p.m. on Wednesday, June 2, 2021, in the chapel at Crawford-A. Crim Funeral Home with the Rev. David Rudd officiating. The family will receive friends from 1:00 p.m. until service time on Wednesday at the funeral home. Interment will follow at Strong Cemetery under the direction of Crawford-A. Crim Funeral Home. Mrs. Wallace went to be with her Lord and Savior on May 30, 2021, at her home, Henderson Health and Rehab, with family by her side. She was born on February 15, 1938, in Rusk County. Mrs. Wallace was a life-long resident of Henderson and attended Tatum school. She was a proud and precious Mother, Grandmother, Great-Grandmother, and Mother-In-Law who had many talents that she shared with her family and friends. Anna was an excellent seamstress, cook and homemaker. Mrs. Wallace was an active member of Trinity Baptist Church until her untimely illness in January 2009. She loved her church and served the Lord with a grateful heart. Preceding her in death was the love of her life and husband of 63 years, Audie Hays Wallace, and sister, Gay Nell Heaton. Survivors include her favorite son, Richard Wallace and wife Glenda of Henderson; daughter, Debora Holts and husband Robert of Henderson; grandsons, Ryan Wallace and wife Laura of the Colony, Texas, and Chase Holts and wife Ashley of Henderson; great-granddaughters, Piper and Maxley; brother, Johnny Beall and wife Patti of Henderson; special friend, Cathy Price; her Henderson Health and Rehab family; loving sitters, Patty and Betsy; and a host of other friends and caregivers. Pallbearers will be Chase Holts, Robert Holts, Chance Courtney, Mike Nelson, Luke Martinez, and Jeff Davis. Honorary pallbearers will be Bobby Pool and Ross Neill. In lieu of flowers, memorial donations may be made to Strong Cemetery at P.O. Box 2347, Henderson, TX 75653. Words of comfort may be shared with the family at www.crawfordacrim.com.

A celebration of the life of Mrs. Anna Ruth "Ann" Wallace, 83, of Henderson, will be held at 2:00 p.m. on Wednesday, June 2, 2021, in the chapel at Crawford-A. Crim Funeral Home with the Rev. David Rudd officiating. The family will receive... View Obituary & Service Information

The family of Mrs. Anna Ruth "Ann" Wallace created this Life Tributes page to make it easy to share your memories.