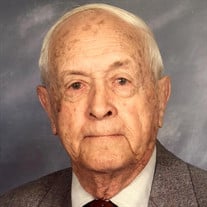 A celebration of the life of Mr. Almon Jackson “Jack” Gray, 98, of Henderson will be held at First Presbyterian Church of Henderson, at eleven o’clock on Wednesday, September 25, 2019, officiated by Rev. Michelle Goff. There will be a time of visitation with the family following the service at the church. A private family burial will be held at Lakewood Memorial Park under the direction of Crawford-A. Crim Funeral Home. Mr. Gray was born October 6, 1920, in Henderson, Texas, and passed away September 20, 2019, in Longview, Texas. He was a graduate of Henderson High School and joined the Corps of Cadets at Texas A & M University. Jack served in the U. S. Army anti-aircraft artillery battalion during World War II, participating in the D-Day invasion, earning a Bronze Star for bravery, and achieving the rank of Major. Upon return from the war, he finished his education at A & M and returned to Henderson to succeed his father C.W. Gray as Mobil Oil company consignee for Rusk County. Jack enjoyed hunting and fishing, and his cows and garden. He loved to go to his deer lease with his hunting buddies. He enjoyed serving on the Session at his church for many years and singing in the choir. He was a dear brother and uncle. Jack is survived by his brother Delbert of Henderson, his sisters Jane and Jean, both of Arlington, and many nieces and nephews and grands who dearly loved their Uncle Jack. Honorary pallbearers will be Larry Gray Bloomquist, Charles Eric Bloomquist, Alfred Glenn Nelson, Clayton Andrew Nelson, Charles David Gray, Charles Harry Gregory, and William Hampton Gray. In lieu of flowers, memorial contributions may be made to First Presbyterian Church, 311 South High, Henderson, TX. 75654. Words of comfort may be shared with the family at www.crawfordacrim.com.

A celebration of the life of Mr. Almon Jackson &#8220;Jack&#8221; Gray, 98, of Henderson will be held at First Presbyterian Church of Henderson, at eleven o&#8217;clock on Wednesday, September 25, 2019, officiated by Rev. Michelle Goff. There... View Obituary & Service Information

The family of Mr. Almon "Jack" Gray created this Life Tributes page to make it easy to share your memories.