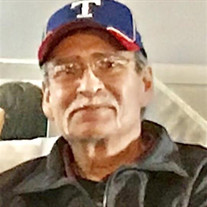 A Celebration of Life for Mr. Adam Trevino, 61, of Henderson, will be held at 4PM on Saturday, March 17, 2018 at Crawford - A. Crim Funeral Home with Gary Trevino officiating. Visitation will be held from 3PM until service time at the funeral home. Mr. Trevino passed from this life on March 13, 2018, in Henderson. He was born on September 13, 1956 to Esteban Trevino, Sr. and Ofelia Barbosa Trevino in Brownsville, Texas. He was a member of the Arp Assembly of God. Mr. Trevino was a very hardworking man, and after working for 25 years at Wal-Mart, he retired long enough to enjoy watching his son play baseball for a few years. He joined the Lowe's team after coming out of retirement, where he worked for the last 13 years. He continued to work during the course of his illness, and was a very strong and courageous man who loved to fish and enjoy every spare minute with his family. He was very attentive to his family, and will be missed greatly. Preceding Mr. Trevino in death were his parents; his brother, Esteban Angel Trevino, Jr.; and his father-in-law, M.V. Hudson. He is survived by his wife of 33 years, Gwen Hudson Trevino of Henderson; children, Mark Norwood and his daughter Elizabeth of New London, Brandy Brooks and husband Corey and their children Caitlyn, Clayton, Kristen, and Ally of Henderson, and Matt Trevino and wife Sarah and their children Kinsey, Nate, and Cora of Tyler; brothers, Javier Trevino and wife Tammy of Diboll, Gary Trevino of Lufkin, and David Trevino and wife Donna of Lufkin; sister, Lupe Acosta and husband Gale of Lufkin; as well as a host of other nieces, nephews, family, and friends. In lieu of flowers, memorial contributions may be made to the New London Volunteer Fire Department, 180 E. Phillips, New London, TX 75682. Words of comfort may be shared with the family at www.crawfordacrim.com.

A Celebration of Life for Mr. Adam Trevino, 61, of Henderson, will be held at 4PM on Saturday, March 17, 2018 at Crawford - A. Crim Funeral Home with Gary Trevino officiating. Visitation will be held from 3PM until service time at the funeral... View Obituary & Service Information

The family of Mr. Adam Trevino created this Life Tributes page to make it easy to share your memories.

A Celebration of Life for Mr. Adam Trevino, 61, of Henderson,...