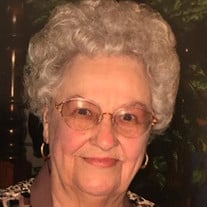 Graveside services for Mrs. Ada Bernice Triplett Cowart, 95, formerly of Henderson, will be held at 11:00 a.m. on Tuesday, November 20, 2018, at Lakewood Memorial Park with a celebration of life to follow at 2:00 p.m. in the chapel at Crawford-A. Crim Funeral Home, under the direction of Crawford-A. Crim Funeral Home. The family will receive friends follow the service at the funeral home. Ada Bernice Cowart passed from this life on November 14, 2018 surrounded by family. She was born June 12, 1923 in the oil field camps in Kansas, the oldest daughter of Bernie and Elsie Faye Triplett. Ada graduated from Drury College in Springfield, Missouri and worked for CP&L in the Rio Grande Valley during the years of World War II. She married Thomas Ray Cowart in San Benito, Texas, on June 25, 1946. During their years together, they moved their family and Cowart Cattle Company to Henderson and later operated East Texas Land Sales. They were married for 27 years until his untimely passing in 1973. In 1986, Ada married Verner Chambless and they were married 14 years until Verner passed away in 2000. She taught art in the Henderson school system, covering multiple grades and administering the art program for the district. She was a life long follower of Jesus Christ and attended South Main Church of Christ and helped form the Henderson Church of Christ. Recently, Ada attended the MacArthur Park Church of Christ in San Antonio, and also evangelized residents in her assisted living to attend a church service that was held there. Her loving and compassionate spirit was also demonstrated by her volunteering with the Hospice organization in Rusk County as well as being a generous participant in many charity efforts through out her years. Ada is survived by Dax (Donnie) Cowart of Fallbrook, CA with wife Samantha Berryessa; Jim Cowart and wife Jeanne of Henderson; and Beth Roach and husband Brad of San Antonio; step-son Jimmie Chambless and late wife Joyce. She is also survived by four grandsons Matt and Craig Cowart, Austin and Grahm Roach and wife Jena, step-grandchildren James Chambless and wife Carol, Paige Bing and husband Rich, Jeremy and Jeff Sprott, Joelle Sprott Yates; Blake Chambless and wife Lauren; and three great-grandchildren: Sawyer, Channing, and Remington Roach; and two step-great grandchild Kaden Hawkins and Kambrie Chambless; Ada was preceded in death by her parents, sister Delores (Triplett) Langston, brother Harry Triplett, infant daughter Linda Sue, husband Thomas Ray Cowart, husband Verner Chambless; step-daughter Judy Sprott and her late husband Bill. Pallbearers will be Matt Cowart, Craig Cowart, Austin Roach, Grahm Roach, Wesly Goode, and Steven Goode. In lieu of flowers, memorial donations may be made to Eastern European Ministries at P.O. Box 55245, Hurst, TX 76054 or online at www.eem.org, and/or to Hospice of East Texas at 4111 University Blvd, Tyler, TX 75701. Words of comfort may be shared with the family at www.crawfordacrim.com.

Graveside services for Mrs. Ada Bernice Triplett Cowart, 95, formerly of Henderson, will be held at 11:00 a.m. on Tuesday, November 20, 2018, at Lakewood Memorial Park with a celebration of life to follow at 2:00 p.m. in the chapel at Crawford-A.... View Obituary & Service Information

The family of Mrs. Ada Bernice Triplett Cowart created this Life Tributes page to make it easy to share your memories.